Tuan Chau international tourist and entertainment area – a luxurious and bustling tourist destination created by man on the banks of Heritage, World Natural Wonders Ha Long Bay. With 20 years of investment in construction and development, including many world-class tourism products and services, Tuan Chau Group has changed the poor and unspoiled island into the “pearl island” as it is today. . In this modern tourist space, the Cruise Port system is a prominent highlight, adorning and honoring the value of Tuan Chau International Tourist Area as well as the World Wonder of Ha Long Bay. Located between the two banks of the urban area to the south of Tuan Chau island is Tuan Chau 1 Port. The port is built on a modern scale in the style of European ports. The port has been in operation since 2009. The port has a berth length of 2,000m, the capacity to receive more than 200 large and small ships to pick up and drop off passengers. The central area of ​​the port is a system of terminals, waiting rooms, and operating areas with a luxurious space of more than 8,000m2, arranged for more than 1,000 seats and can simultaneously receive about 3,000 guests waiting for procedures to disembark. visit Ha Long Bay.

In addition, at the station, there is a system of supermarkets and restaurants along with free services for visitors such as: ethnic music and dance; water Puppet; public health station; drinking water; WIFI; Children’s play area; High-class restrooms… Along with that is a passenger support center, digitization of professional methods, a roof system around the port, and a row of 100 security cameras to monitor around the port to create a safe environment. Professional, showing how to do modern and civilized tourism… Since then, there will be no phenomenon of theft, hawking, enticing customers, friendly staff attitude, dedicated service to visitors . Seaplane brings tourists from Hanoi to the port

Adjacent to Tuan Chau 1 Port to the southwest is Tuan Chau International Passenger Port (commonly known as Port 2), which is 11 times larger than Tuan Chau 1 Port. The port is invested synchronously, with a total investment value of thousands. billion. The port was started construction in 2012 on a deserted tidal flat with mangroves. After 3 years of construction under the supervision, design and supervision of leading consultants, engineers and architects in Vietnam and in the world, until October 2015, the Ministry of Transport , Quang Ninh province and Tuan Chau Group conducted the announcement and inauguration ceremony. The port has a berth of nearly 7km in length, followed by a system of operators, stations, working quarters of the Port Authority authorities, Ha Long Bay Management Board, and a logistics system for fresh water supply. , gasoline for ships, and thousands of coconut trees interspersed with lawns, flower beds adorn and shade the complex of 44 representative offices for shipping lines. The port has an average depth of 15m. The narrowest place is 300m, the widest place is 800m, eligible to receive 2,000 ships anchored, pick up and drop off passengers. 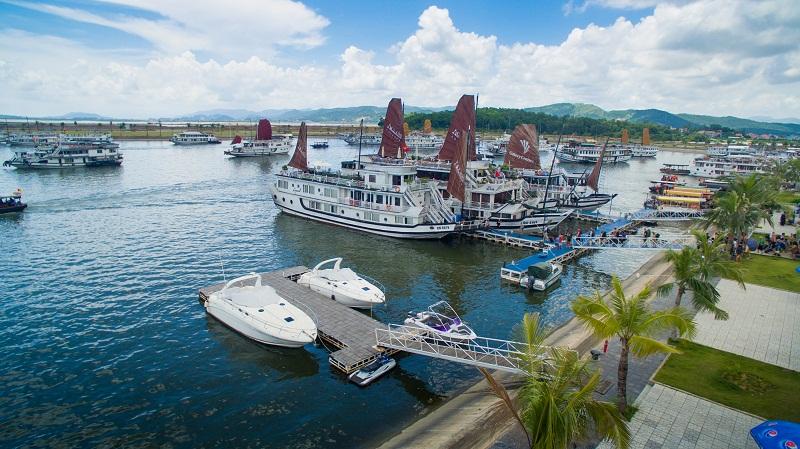 A corner of Tuan Chau port 2

Around the port is a convenient transportation system, a high-class urban complex, a system of resorts, hotels, restaurants, commercial centers, spacious parking, areas for receiving and treating waste. on the water surface and waste from ships… The port has been established by the Vietnam Record Organization as the largest man-made yacht port in Vietnam. Tuan Chau international passenger port system includes port 1 merged with port 2 with a total area of ​​200ha, berth length of more than 10km, deep draft, built in an airtight place, convenient for work manage as well as ensure the safety of ships entering and leaving anchorage and receiving and disembarking passengers. The port is close to the national waterway, the scenic attractions of Ha Long Bay and the Cat Ba island biosphere reserve. Since the inauguration and reception of cruise ships on Ha Long Bay to the port of operation, the port has constantly innovated, improved service quality, affirmed its brand, affirmed a new exploitation model “one-way”. destination, many facilities”.

It can be said that Tuan Chau international tourist area in general and Tuan Chau international passenger port system in particular are the pride of Quang Ninh tourism. This is the most modern building in Southeast Asia and the first in Vietnam. Since coming into operation, the port has become the “gateway” of Ha Long Bay, more than 500 cruise ships on Ha Long Bay are operating at the port, each year handling more than 3 million domestic and international visitors. Visit and explore Ha Long Bay. The port has been identified on the international tourist map and is a bridge connecting Quang Ninh tourism services to the world.